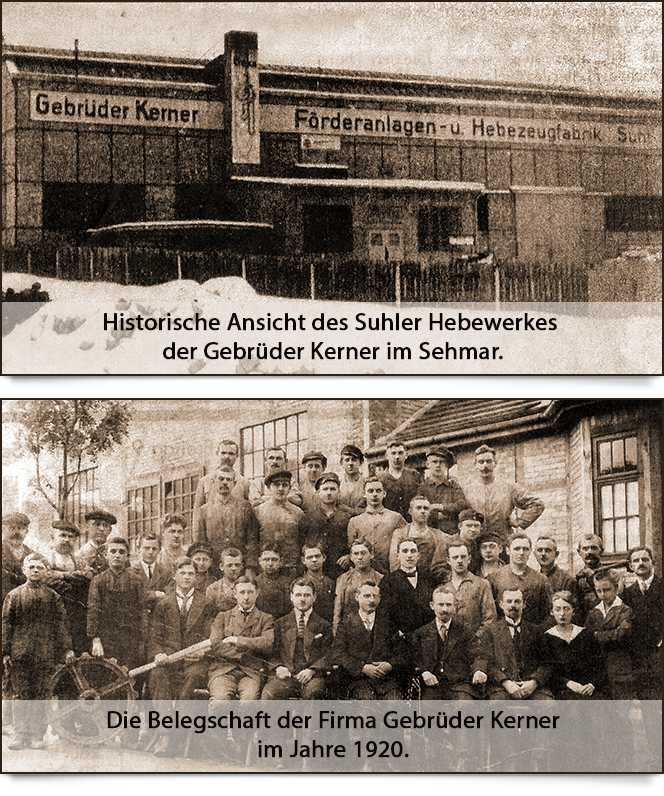 It all began with the products of the Kerner company. These became indispensable for emerging new industries such as the potash industry. Franz Kerner, chief engineer at Suhl, founded a factory for conveyor systems in Heinrichs and had it entered in the company register on 1 January 1920 as Gebrüder Kerner, Förderanlagenbau Suhl. Production started with 25 employees. In fact, the first storage scraper for the Roßleben potash plant had to be built under the open sky in 1920 due to the lack of a building permit. With the increase of the production volume in the potash mines, the order volume of the new Suhl specialist company also increased. According to its own patents, the plant developed the first types of de-storage scrapers for the intermediate and dispatch warehouses of the potash plants, as well as troughed chain conveyors for the dust-free transport of raw and ground salts, transport equipment for grain warehouses, sugar factories and other conveyed goods. The young company grew, so that by 1925 the workforce already had 100 employees. New products were developed and patented. These included wet ash removal systems for boiler houses, which extinguished the partly still glowing ash from the boilers in concrete or steel troughs and prepared it for landfill. 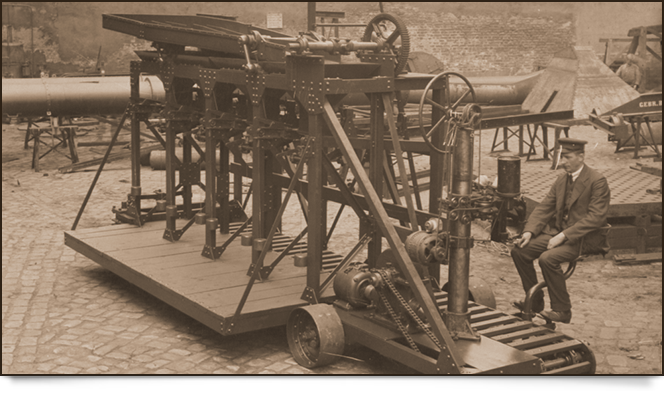 The entrepreneur Kerner was interested in supplying as complete a system as possible. The company designed and built trolleys for conveyors, bucket elevators, wagon loaders and unloaders, baggers and screw conveyors. 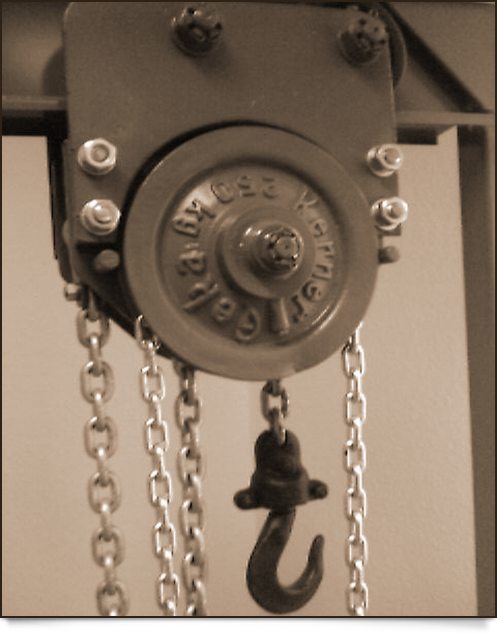 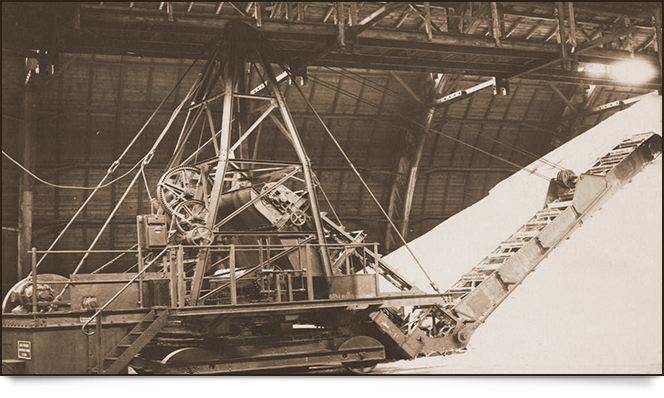 A new production segment was created with the series production of spur-gear quick hoists and trolleys up to 5 t lifting capacity.

The global economic crisis following the Black Friday of the New York Stock Exchange (Oct. 1929) also affects the German fertilizer industry and thus Kerner's main client. The number of employees fell from month to month in 1930 to less than 50% in 1929. At that time, huge deposits of potash salt were discovered near Solikamsk in the Soviet Union, which led to the construction of new plants and corresponding technical equipment. In 1931, the Kerner company received extensive orders from the USSR commercial agency in Germany. The armaments programme also brought orders for the supply industry. For Kerner this meant many orders, also for weapons and aircraft production. In 1935 the company again had 107 employees: 19 salaried employees and 88 blue-collar workers. Until its incorporation, Gebr. Kerner was subject to tax in the municipality of Heinrichs. At that time it was the second largest payer after Simson-Werke. The factory expands. Thus a new forge building was built in 1939 and the cutting-off shop in 1941. Further production facilities for armaments production were set up in Breitenbach, Hinternah and Zella-Mehlis. In 1944 there were 69 German workers, 68 prisoners of war, 66 foreigners and 62 employees working for the company. On April 3, 1945, the American army moved towards Suhl. The first Suhl houses reached them at Sehmar and thus the conveyor plant Gebr. Kerner. The Americans set up their temporary headquarters there. Production was suspended at this time. Only after the American occupying power had cleared the company again, could the clean-up work and production begin with about 15 people under the old management. Knowing the future spheres of influence (zones of occupation), the merchant Kurt Kerner left Suhl with his family on July 1, 1945, before the Soviet troops entered the West and founded the company SIK-Hebezeugebau in Saarbrücken. 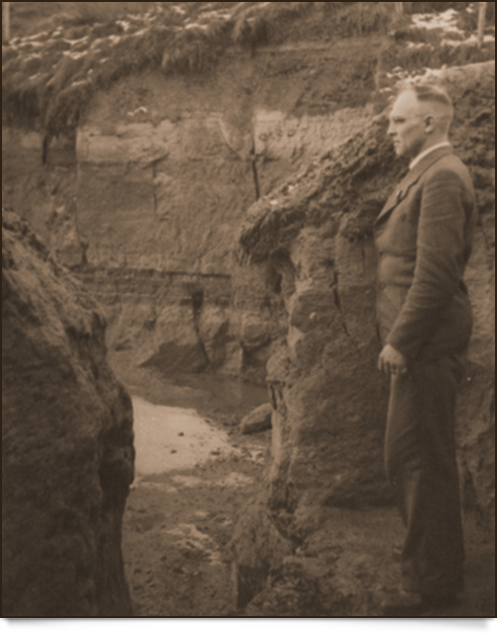 After the withdrawal of the Americans, the Soviet occupying power moves into Suhl on 3 July 1945 Nazi henchmen are immediately transferred to the commandant's office.

The former senior chief Franz Kerner was deprived of all powers of attorney and signature. He remained in the company and was commissioned by the Soviet military administration to personally ensure smooth exploitation. Robert Hoffmann from Suhl was appointed acting plant manager. Walter Kerner was also arrested by the Soviets as a former military economy leader. On 20 March 1946, with the orders 124 and 126 of the Soviet occupying power, the entire assets of the Gebrüder Kerner company were sequestered and expropriated in August 1946. With the help of the Soviet military administration in Weimar, the factory continued to operate under new management in August 1945 with about 15 to 20 workers. The company was now called: "Gebr. Kerner, state-owned company, conveyor and lifting company, Suhl". In the year 1947 the hoist factory again counted approx. 100 employees. In addition to chain hoists and trolleys up to three tons, rope hoists with a lifting capacity of 2.5 tons and electrically operated bag lifts were also produced as in-house developments. The production of conveyors is also restarted. Special emphasis is placed on the manufacture of spare and spare parts to enable the maintenance of previously delivered systems. On September 1, 1947, Mr. Albert Handzik from Zeitz became plant manager in Suhl by decision of the head office of state-owned companies in Erfurt. On 1 July 1948, the factory came to the Vereinigung Volkseigener Betriebe (VVB) für Ausrüstung von Bergbau und Schwerindustrie ABUS Halle and is now called ABUS VEB Hebezeugwerk Suhl. Wilhelm Sauerbrey, the production manager, became the new plant manager on 1 October 1948. The workforce had increased to 131 employees. In 1952, the company's engineers developed a 10-tonne helical pulley block. In 1959, the company specialized in two main product groups: Small hoists and storage scrapers. The development and manufacture of storage scrapers / scraper belt de-ashers for a wide variety of applications became the focus of the production profile and accounted for approx. 70 % of goods production. The main customers were the Soviet Union, the potash industry and the coal-fired power plants of the GDR. The annual production reached a value of approx. 25 to 30 million IAP. VEB Hebezeugwerk Suhl becomes the product group leader for small hoists. VEB Hebezeugwerk Treffurt is assigned to it. After the German reunification, the company became a trustee in 1990. In order to adapt the company to the open market conditions, the Treuhand reduced the workforce from approx. 230 to 80 employees. In 1993, the company was privatised as a GmbH with one partner. The buyer, Mr. Grüßing, was an East German entrepreneur who also owned the company Maschinen- und Stahlbau GmbH from Unterkatz near Meiningen. Employment and turnover remained stable. For 1994, an annual turnover of DM 9 million was targeted. The sales areas were the old and new federal states as well as Russia as the main foreign customer. Steel construction with storage scrapers and crane systems as well as contract manufacturing of machine beds and fans continued to account for the majority of production. In August 2003 the company had 74 employees. The order and financial situation deteriorated rapidly at the end of 2003/beginning of 2004. Insolvency had to be applied for in February 2004. SHT Suhler Hebezeugtechnik GmbH commenced production and trading of hoists and load handling equipment on April 1, 2004. In 2008, the company was expanded to include steel construction and conveyor technology. Today the company has 20 employees.